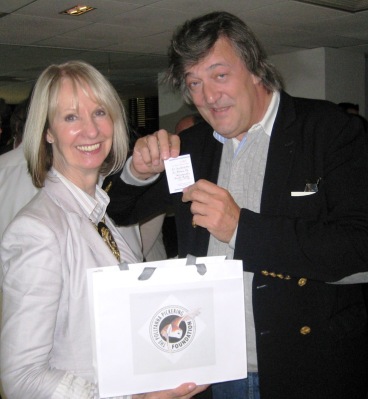 The prize draw was held in conjunction with Pollyanna’s recent exhibition of paintings of endangered species ‘Last Chance to Paint….?’ – inspired in part by the BBC television series ‘Last Chance to See…..’., a series of documentaries featuring Stephen Fry and zoologist Mark Carwardine travelling to various locations in the hope of encountering species on the brink of extinction. Pollyanna recognised a parallel between her own painting expeditions and the journeys made by the intrepid duo, and the way in which they are then able to share their experiences of the natural world and encounters with some of the world’s most vulnerable creatures – in her case through her award winning artwork.

Pollyanna commented “we were delighted with the response to the exhibition and the prize draw, and it was wonderful that Stephen Fry – whose programmes helped to inspire the entire project – was willing to take time out of his busy schedule to help me select the winning tickets. His genuine concern for the fate of endangered species is evident”. Stephen admits that while he does love animals, he’s not so keen on the fact that to see them in the wild “one needs to spend so much of the time trekking and camping to where they are”. But it’s a sacrifice he’s prepared to make to share some incredible moments, and to inspire people to keep talking about conservation, saying “Wouldn’t it be a shame, quite literally shaming, if all we leave to the people of the future are photographs in place of thousands and thousands of some of the most extraordinary, complex, baffling and sometimes hilarious creatures that ever walked upon the Earth”

Supporters up and down the country bought tickets in this national draw to help raise £3,250.00 which will be used to fund a cheetah education programme in Namibia.
Ninety percent of Namibia’s wild cheetah live on farmlands and come into conflict with farmers and livestock and game farming interests. Funding from the Pollyanna Pickering Foundation will enable The Cheetah Conservation Fund education team to conduct a weeklong training course for 30 farmers. The Foundation believes that education programmes of this kind are one of the most important factors in ensuring the continued survival of cheetahs in the wild, where they belong. Mrs Read of Derbyshire is the lucky winner of Pollyanna’s original painting of two cheetahs.

For a full list of winners and more information visit http://www.pollyannapickering.co.uk

An interview with David Grant
sign up for the newsletter

We support the work of

Exhibition Photos
Can't go to the show? No problem. You can see the photos of our exhibitions here. Click the links below.