I’ve lived in several locations in the UK and thankfully wherever we have lived our neighbour’s have all been cat lovers too, so I’ve never been short of some furry feline company.  At one point we had twelve cats visiting us which were wonderful for me as an artist as I had so many different characters to paint. 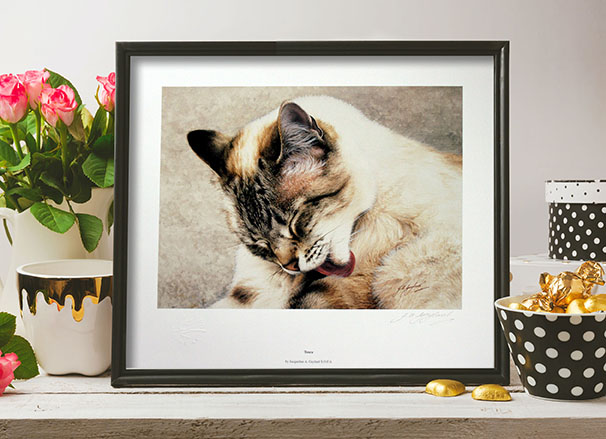 One particular character was called “Tosca” and she lives in the seaside town of Torquay in South Devon.   She is a cross between a Siamese and Persian and has the most beautiful markings and personality to boot!  We were first introduced to her when our neighbour brought the little bundle of fluff to show us when she was only a few weeks old.  We hit it off straight away, who wouldn’t!

As soon as she was allowed outside, she confidently strolled down our drive and sat in our porch, having a good wash; it’s as if she knew she was more than welcome and we’d become her second home.

As she grew older, she often liked to jump onto the high kitchen window cill to let us know she wanted to be let inside; and it goes without saying that she was in like a shot as soon as the window was open!

Although she looks very angelic, she is strong and extremely agile.  I remember this being demonstrated perfectly during one winter’s night when a storm was raging and the wind was howling over the sea towards our home.  We all hoped that the neighbour’s cats were safely curled up inside somewhere and before we went to bed we put on our coats and went around the garden by torchlight calling their names just in case any of them were still out in the horrible weather.  The wind was so loud that our voices probably couldn’t be heard, but at least we had peace of mind that we’d tried.

Our bedrooms were upstairs and have dorma windows that face the sea.  At 3am I could hear the branches and rain hitting the panes of glass on the windows and making quite a racket.  I soon realised that I could also hear a faint meow coming from the window.  I wondered for a second whether I was imagining it, but soon I was opening the curtains to discover a very soggy Tosca staring back at me!  Her eyes were big as saucers, her little face was dripping wet and her expression simply portrayed her feelings of ‘please rescue me, quick!’  She was clinging onto the wooden cill with her claws and her back legs were scratching the tiles to try to get some sort of foothold.  As the windows open outwards and she had positioned herself so that there was no way of me opening it without knocking her off the roof.

I quickly opened the opposite window and tried to encourage her to come closer, so that I could grab her and pull her inside, but the wind and rain was too much for her and she couldn’t move towards me.  I had to do something for her, and quickly.  I was fearful she would suddenly loose grip and roll off the roof!  I managed to climb onto the cill and carefully lent out of the window, holding on with my hand to the inside of the window frame.  I managed to grab her shoulder and gently pull her to safety inside.

After a big cuddle, a good towel dry, and lots of Tosca licking, she curled up on my bed and stayed all night.  She didn’t go home the next day either and slept soundly by the radiator.  I think the ordeal had been too much for her.  She certainly had an adventure that night.

An interview with David Grant
sign up for the newsletter

We support the work of

Exhibition Photos
Can't go to the show? No problem. You can see the photos of our exhibitions here. Click the links below.